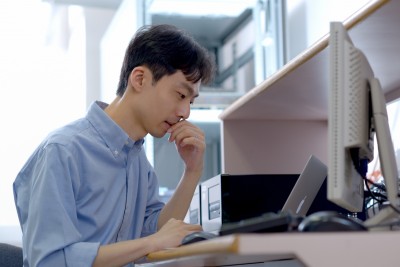 Dr Hayden Kwok Hay So is a computer engineer whose main research interest is in the area of reconfigurable computing using Field Programmable Gate Array (FPGA) and Graphics Processing Unit (GPU). His current work focuses on applying reconfigurable computing techniques in data-centre settings to improve their power-efficiencies. An FPGA is an integrated circuit that allows its functionality to be changed or reconfigured during its lifetime. This enables the user to create specific computing features required for target applications. With GPU computing, the graphic display card of a computer originally designed for processing on-screen graphics is used for general-purpose computing instead, this can be very power efficient as it delivers considerable computation without much power increment. A data-centre is a large construction housing thousands and thousands of computers, which performs computations that support modern IT infrastructures. Google and Facebook are examples of companies that operate large-scale data-centres.

Meeting the power consumption demands of such data-centres is a major challenge. Not only does high power consumption incur significant engineering challenges to heat removal, it also decreases the reliability of a system, raises operating cost, and most importantly, increases the burden on our environment. Unfortunately, the power consumption of a system usually rises with increased computer performance; and demand for computing power will only intensify in the future. The challenge for computer engineers therefore, is to search for alternative system architectures that may deliver the never-ending demand for computer performance without significant increases in power consumption. So is investigating potential solutions to this problem, one of these is whether using FPGA’s or alternative computing devices can improve performance without leading to a substantial escalation in power.

Another focus of So’s research is on narrowing the knowledge gap between the theoretical aspects of computer engineering and the user. One area that requires substantial computing power is medical imaging. So introduced his colleagues at the University of Hong Kong to the benefits of FPGAs and GPUs and collaborated with them to set up working systems to achieve the optimum level of performance required. By building collaborative networks like these, So seeks to transmit the theory into the practical domain, thereby bridging the gap and bringing people into “the beautiful world of reconfigurable computing”.

Hayden So obtained his B.S. in Electrical Engineering and Computer Sciences (1998), his M.S. (2000) and his PhD (2007) at the University of California, Berkeley. He joined the University of Hong Kong in 2007 where he is currently Assistant Professor. His research has appeared in publications such as ACM Transactions on Embedded Computing Systems (TECS), IEEE Micro, ACM Computer Architecture News, International Journal of Circuit Theory and Applications (IJCTA), and IEEE Transactions on Consumer Electronics.