Dr Liwei Lu is an immunologist who uses genetics techniques and animal disease models to study the malfunctions of our immune systems during disease conditions.

Autoimmune diseases, such as rheumatoid arthritis and type I insulin-dependent diabetes mellitus, are a group of incurable diseases caused by a dysregulation of immune systems. In these diseases, our immune system attack our tissues through the production of abnormal antibodies or other immune responses.1

Lu researches on B lymphocytes, a class of white blood cells whose hyperactivity plays an important role in triggering abnormal antibody production. Using a mouse model, his research group has successfully identified a key player in arthritis progression, known as B cell-activating factor (BAFF). Lu discovered that the level of BAFF is substantially increased during the induction of arthritis and found that BAFF contributes to disease progression by enhancing the proliferation of B cells as well as blocking their programmed cell death.2 This finding suggests that BAFF might be an important therapeutic target in autoimmune diseases.

Indeed, in 2008, Lu’s group demonstrated the use of a gene-silencing approach to block the production of BAFF proteins and suppress arthritis development in a mouse disease model.3 Conventional treatments for rheumatoid arthritis, a chronic disease characterised by joint damage and synovial inflammation, typically involve a global inhibition of the overactive immune system. Therefore, they can result in serious side effects by lowering our bodies’ ability to fight infections. Lu’s approach, however, is much more targeted. The production of BAFF proteins can be blocked locally through the injection of the gene-silencing machinery into the affected joint tissues. This strategy is thus a very promising approach for curing rheumatoid arthritis as well as other autoimmune diseases with few side effects.

Lu also works on leptin, a hormone produced by fat cells. Although leptin is known to regulate lymphocyte development, its exact mechanisms of action remain elusive. Lu’s team is among the first to provide clues to this question. His group discovered the effects of leptin on the functions of dendritic cells, an important immune cell type. They found that, compared to normal mice, mice deficient in leptin receptor tend to have fewer dendritic cells due to an increase of programmed cell deaths occurring among these cells.4 Moreover, they found that the remaining dendritic cells in these mutant mice have a reduced capability to stimulate the proliferation of lymphocytes.4 These findings thus provide important insights into leptin’s functions in immune system development.

Lu will dedicate his fellowship to the study of biological problems with social impact. For example, he hopes to decipher the mechanisms underlying the hyperactivity of immune response during H5N1 virus infections, which has been suggested to lead to fatal consequences.

Lu received his undergraduate medical training from the Zhenjiang Medical College of Jiangsu University and his Master of Medicine from Norman Bethune Medical University in China. After completing his PhD at McGill University in 1997, he went on to conduct post-doctoral research at the University of Toronto. In 2000, Lu joined the faculty of the University of Hong Kong, where he is currently an associate professor in the Department of Pathology. (2012-13) 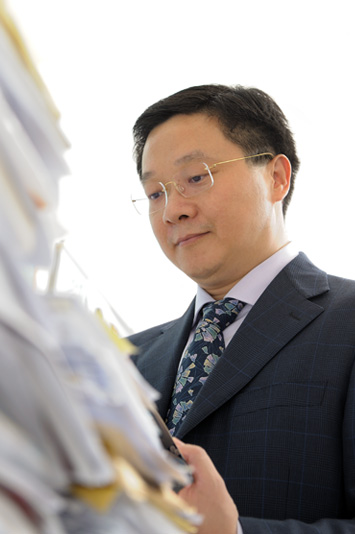