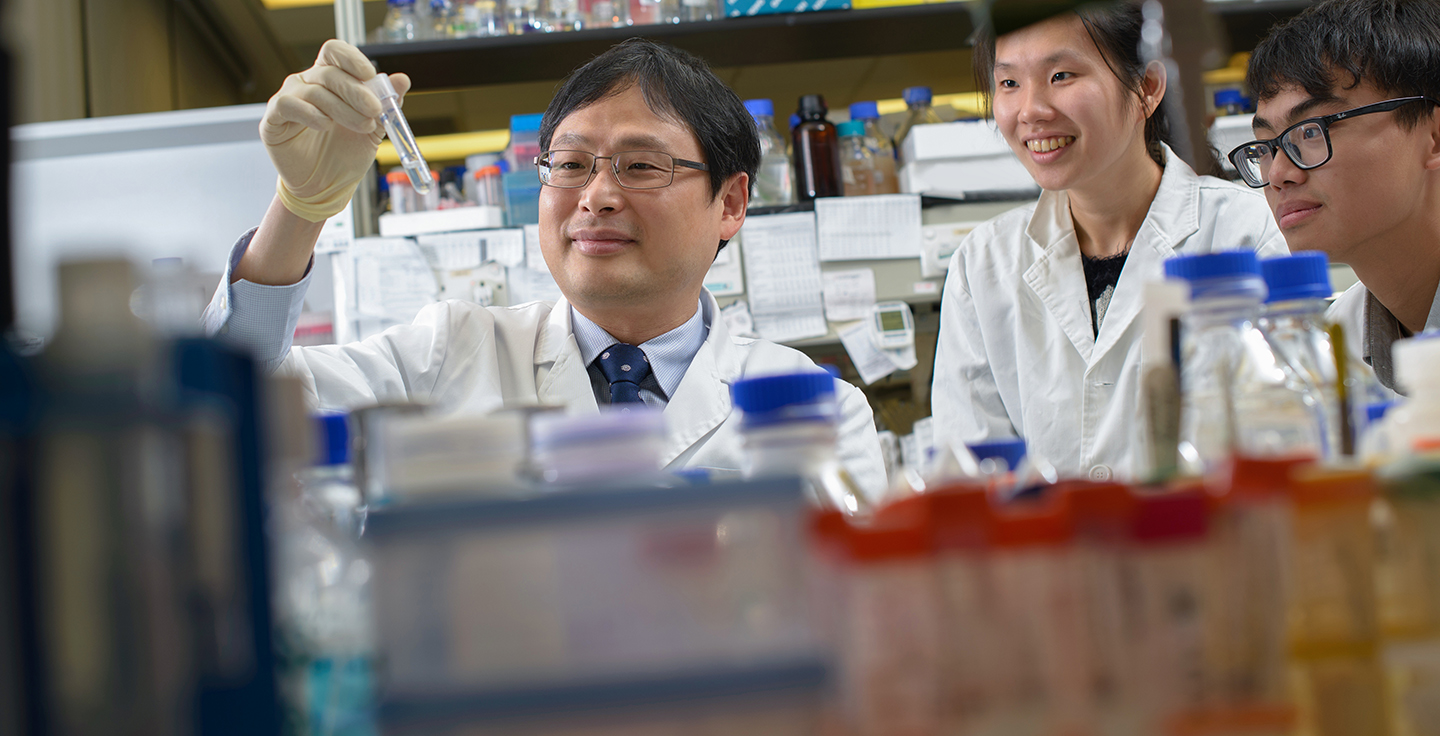 Professor Dong-yan Jin is a seasoned virologist with a keen research interest in viral diseases and oncology. He seeks to understand why viruses cause different diseases as well as how different DNA and RNA viruses are able to invade their host’s innate immunity, which is the first line of defense in humans against these invading viruses.

Jin had made a major discovery in the field of molecular virology in 1998 with the discovery of a new cell-cycle checkpoint called the mitotic checkpoint protein (MAD-1). This led to his exploration of a link between MAD-1 and an oncogenic virus called the Human T-Cell Leukemia Virus Type 1 (HTLV-1), a virus that leads to highly aggressive form of adult cell leukemia, the findings of which were published in 2008.

His research also covers diseases more prevalent in the local Hong Kong and China regions, such as the Epstein-Barr virus. This virus affects 90-95% of the whole population, and can cause nasopharyngeal carcinoma and some other types of cancer in a small subset of people. It was discovered in 2008 that a small RNA encoded by the virus targeted a prodeath protein that promotes the survival of cancer cells.

A continuation in that line of research led to a discovery in 2011 of a new function of PACT, a double-stranded RNA binding protein that Jin learned acts as a partner or activator of another virus sensor called the RIG-I protein to mobilize the host’s innate defense (i.e. the production of the defense proteins called interferons) when confronted by RNA viruses.

For his Croucher Senior Research Fellowship, Jin takes on a more in-depth analysis of the mechanism of PACT working together with RIG-I and MDA-5, another similar virus sensor protein. In the battle between the virus and the host, the cells and the viruses all undergo anti-viral and anti-defense mechanisms. By studying these functions, Jin hopes to better understand how different DNA and RNA viruses have different viral proteins that target the PACT proteins to deactivate the innate immunity of the host.

Research institutes from all over the world have begun to use this newly-introduced PACT model as well to study the mechanisms of a large variety of viruses. For example, in the Icahn School of Medicine at Mount Sinai in New York, this model is being to discover that the Ebola virus encodes a protein called VP35 that targets PACT proteins.

“In science, collaboration is more important than competition. There are very many important questions to be answered, and they can all be tackled from different angles. In a team of scientists, you’ll find us, the molecular virologists, collaborating with clinical virologists, structural biologists, and geneticists to take on scientific problems together.”

Regarding the Fellowship, Jin says it is more than just an opportunity to dedicate time for research.

“Being awarded a fellowship like the Croucher Senior Research Fellowship also helps train younger assistant professors to be better teachers; as they have the chance to work closely with experienced professors and are required to step up to the challenge of teaching topics they would otherwise not have the opportunity to teach in an alternative circumstance.”

Jin was awarded the Croucher Senior Research Fellowship in 2014. He is currently a professor in the Department of Biochemistry in the University of Hong Kong Li Ka Shing Faculty of Medicine.