Professor Henry Chan is a medical researcher who conducts genetic and clinical studies of liver diseases. He works on chronic hepatitis B, the leading cause of liver cancer in Asia. His research has helped to decipher the relationship between the genetics of hepatitis B virus (HBV) and disease progression. The prevalence of different HBV genotypes is strongly associated with geographic origins and ethnicity. Genotypes B and C are the predominant types among Asians, with Cs and Ce being two major subgenotypes of genotype C viruses.

In a longitudinal clinical study involving more than 1,000 chronic hepatitis patients, Chan discovered that HBV subgenotype Ce is associated with an increased risk of hepatocellular carcinoma (HCC). This discovery bears important implications for the treatment and management of different viral infections. In addition, using whole genome sequencing to compare DNA sequences of HBV viruses isolated from patients with or without HCC, Chan identified a number of genotype/subgenotype-specific mutations associated with cancer development. This finding provides a collection of genomic markers for HCC, and insight into the potential mechanisms by which different types of viruses cause cancer. Chan has also made significant progress in the diagnosis of liver fibrosis. In two of his highly cited publications, Chan standardises liver stiffness measurements using transient elastography as a non-invasive assessment of liver fibrosis, taking into account the effects of factors such as inflammation on the interpretation of results. This offers a reliable alternative to the risky and invasive liver biopsy. Chan will use his Senior Medical Research Fellowship to launch a large-scale genomic study for liver diseases in the Asia-Pacific region.

Chan graduated in medicine and completed his postgraduate training at the Chinese University of Hong Kong. He joined the staff of the Prince of Wales Hospital in 1993 and was appointed to a professorship in the Department of Medicine and Therapeutics of CUHK in 2006. He is currently a Fellow of the Hong Kong College of Physicians, Director of the Center for Liver Health and an Honorary Consultant at the Prince of Wales Hospital. (2011/2012) 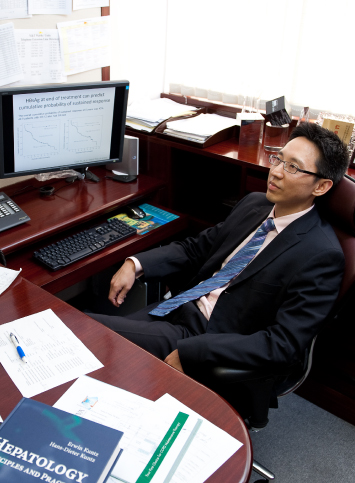